The timeless charm of diamond was cherished long before it became the April Birthstone. And the places where diamond comes from are as fascinating as the lore that surrounds the gem. So let’s travel the globe to visit some famous diamond localities, past and present, in search of this April birthstone.

Until about 1730, the Golconda region of southern India was the only known diamond-producing region in the world. A number of the world’s most famous diamonds unearthed there, including the Hope Diamond, a 45.52 carat (ct) Fancy Dark grayish blue, cushion antique brilliant; the Idol’s Eye, a 70.20 ct Very Light blue diamond described as being between a round and a pear-shaped brilliant; and the Kohl –Amur a 105.60 ct modified oval brilliant set in Great Britain’s the Queen Mother’s Crown.

Golconda’s diamond mines are long depleted. The ruins of an ancient fort where diamonds were once traded stands as a picturesque reminder of India’s historic role in the trade.

As India’s diamond mines began to dry up, new sources were discovered in Brazil. From around 1730 to 1870, Brazil supplied most of the world’s diamonds. Alluvial deposits (a surface deposits formed by running water which can contain concentrations of valuable minerals such as gold, diamonds, or colored gemstones) were found in the states of Minas Gerais, Bahia, Mato Grosso, and Roraíma. Brazil’s role as the largest global supplier of diamonds faded quickly with the discovery of large diamond deposits in South Africa in the 1870s.

Where Is the April Birthstone Found Today?

World demand for the much-coveted April birthstone continued to rise despite the ebb and flow of diamond production. Since the late 19th century, diamonds have been discovered in far-flung places around the globe, helping to ensure a supply to fill the world’s appetite for engagement rings and fine jewelry.

Near the town of Mirnyi in eastern Siberia – a forbidding land of frigid temperatures and short days – the permafrost is so thick that jet engines and explosives are used to crack the icy crust to reach the diamonds below. Dating back to 1829, diamonds were found in alluvial deposits in the Ural Mountains. They were not mined commercially until the 1950s when kimberlite pipes were discovered. Kimberlite pipes are vertical, columnar masses of igneous rock that can be a primary source for diamonds. These pipes were named Zarnista (1954), Mir (1955) and Udachnaya (1955).

In 2013, Alrosa, a Russian diamond mining company, estimated that there were 970 million carats still waiting to be found in the frozen tundra. That’s more than seven times the current annual production of the entire world! However, many of the diamonds recovered here tend to be smaller than ones found in Botswana and South Africa, two other important sources for today’s diamonds. 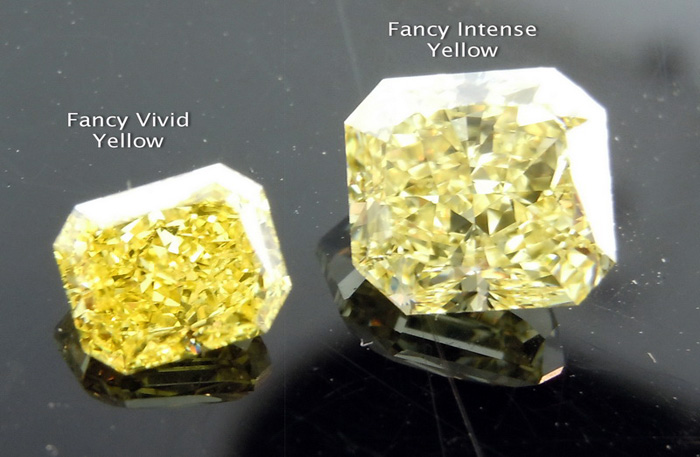 Below the eastern plains of Botswana lie some of the most productive kimberlite pipes in the world. Botswana is the world’s second largest producer of diamonds and the mines responsible for that output are the gigantic Orapa mine which covers 263 acres, the Jwaneng mine (133 acres), and two smaller pipes Letlhakane 1 (29 acres) and Letlhakane 2 (9 acres).

Botswana is using its prolific diamond mines to benefit its people, helping to create a vibrant and growing middle class, a rarity in sub-Saharan Africa. Gaborone, the country’s capital, is home to the state-of-the-art Debswana complex, where approximately 40% of the world’s supply of rough diamonds are sorted and valued. Now a world diamond hub, Botswana is a shining example of how the wise use of a natural resource can change a nation’s future.

Diamonds from the Democratic Republic of the Congo

Hunting for diamonds in the Democratic Republic of Congo is typically done traditionally: with a shovel and lots of muscle. It is back-breaking work. Miners dig pits up to 50 feet deep searching for gravel beds that hold diamond rough. Each shovelful of dirt is then washed in the hopes that it may hold a glittering crystal. Miners also dig up gravel in the many riverbeds that meander across the country, looking for rough hidden under the rushing waters.

The discovery of kimberlite sources in South Africa in 1869 kicked off a diamond rush. The country became the world’s leading diamond producer and the birthplace of the modern diamond industry. By 1874, the mines were so deep that the shovel had to give way to machinery. By 1882, excavations reached 400 feet in depth. The Kimberley cluster – fives mines near the town of Kimberley – along with two additional mines, were the most productive in the early years.

A historic event for the diamond trade was the 1903 discovery of the Premier kimberlite pipe. The 3,106 ct Cullinan rough found there was cut into nine major stones, 96 smaller brilliants and smaller unpolished fragments. The Cullinan I (530.20 ct) and  the Cullinan II (317.40 ct) are part of Great Britain’s coronation regalia. Cullinan III through Cullinan IX are the personal property of Queen Elizabeth II. In 2003, De Beers renamed the Premier mine the Cullinan mine. The mine was sold to Petra in the summer of 2008 and since then, Petra has been discovering large diamonds. In September 2009, the 507.50 ct Cullinan Heritage rough diamond was discovered and sold for $35.3 million. It was the highest sales price for a rough diamond. In the fall of 2014, a 232.08 ct colorless rough diamond was unearthed which sold for $15.2 million.

Other South African kimberlite pipes have been discovered including the Finsch (1958) and Venetia mines (1991).

Scientists suspected that diamonds lay under Canada’s frozen soil, but finding them took decades of searching. After many failed attempts, experts in glacial geology started finding deposits in the 1980s, eventually identifying more than 200 sites.

Four diamond mines are particularly important: Ekati, Diavik, Snap Lake and Victor. All but the last are clustered in the lake region of Northwest Territories (NWT), 250-300 miles north of Yellowknife. Victor is located in northern Ontario. These mines are known for producing high-quality diamonds. 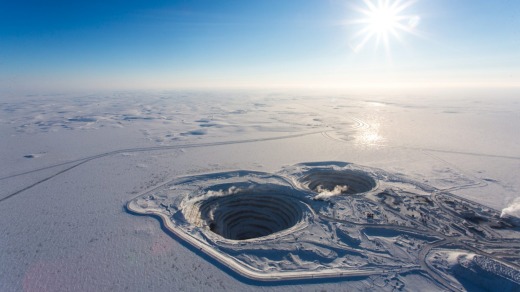 The Diavik mine is about 130 miles from the Arctic Circle. Courtesy: The Diavik Diamond Mine

Mining diamonds in these remote, frozen corners were engineering feats: roads had to be built, electricity had to be brought in, and housing had to be erected – all during the short summer months when the mining areas were relatively accessible.

The Diavik Foxfire, a 187.70 ct gem-quality rough diamond – one of the largest diamonds ever found in Canada – was discovered in December 2015.

Located in Western Australia, the landscape surrounding the Argyle mine stands in sharp contrast to the gemstones that lie underneath. Grasses, bushes, a rare tree, and countless termite mounds cover the unwelcoming environment. Broad, flat plains roll out in all directions, the view occasionally broken by the Matsu and Ragged mountain ranges. A few Aboriginal communities populate the land. All supplies for the miners have to be brought in from the nearest town by plane or truck.

The Argyle mine began in 1979 with the discovery of the AK1 lamproite pipe. Lamproite, like kimberlite, is an igneous rock which can host diamonds. The Argyle mine is famous for consistently yielding pink diamonds – some of the rarest and most desirable of colored diamonds.

To give a sense of the scarcity of Argyle’s pink diamonds, Rio Tinto, the mine owner, estimates that for every half million carats of rough produced, only one carat is suitable for their yearly tender (private events where diamonds are sold to trade professionals). 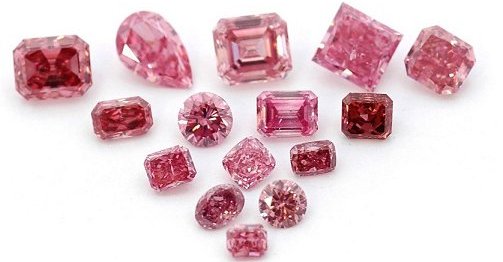 Annual tenders, the invitation-only auctions for pink diamonds from the Argyle mine, attract global interest. Diamantaires from around the world vie for the finest diamonds from Argyle’s current production, averaging 60 diamonds per tender. Interested parties place sealed bids on the gemstones, with the highest bidder claiming the prize. Adding even more drama, the mine is expected to be productive only until 2020, so the days of Argyle pink diamonds are numbered.

The Argyle also produces near colorless yellow, blue, and red diamonds. Just a few decades ago, brown diamonds were often destined for industrial use, but creative jewelry designs turned these once ugly ducklings into coveted swans. 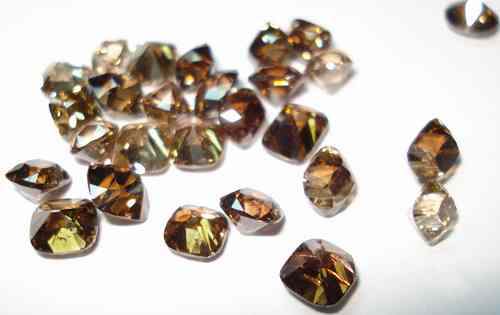 Colored or colorless, large or small, the April birthstone continues to captivate those lucky enough to be born this month, and those lucky in love who receive – or give – an engagement ring. If you’re thinking about acquiring a diamond, we hope our quick excursion helped you know a little more about where diamonds come from.

Embarking on a diamond shopping journey? Don’t forget to and be sure to take along our diamond buying guide.