Peridot is one of the most affordable transparent green gemstones in the world. 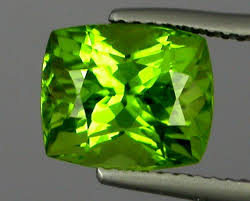 The Egyptians called peridot the "gem of the sun". Given the sumular time frame of the Egyptian period mines (1500 B.C) to the famed Egyptian Cleopatra emerald mines (2000 B.C), it is easy to see why some jewelry historians believe that some (if not at all) of the emeralds that Cleopatra wore may have, in fact, been peridot gemstones.

It is believed that this gem was first mined about 1500 B.C. on a island off the coast of Egypt now known as "Zebirget" or "Zabargad". This island is also sometimes referred to as "St. John's Island". Are we confused yet? To make matters even worse, many years even worse, many years ago the island was called "Topazos", and the green gem mined there also was called Topazos, although the actual gemstone topaz has never been mined on this island. 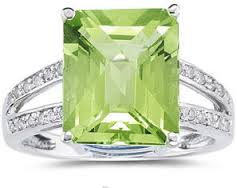 Today, the most important source for peridot is the San Carlos Indian Reservation in Arizona. It is estimated that as much as 80% of the world's peridot production comes from this one location. On the reservation, peridot can only be mined by individual Native Americans or by individual families of Native Americans from the San Carlos Reservation. While this rule protects both the environment and the Native Americans living on the reservation, it may also take longer for Arizona Peridot to become available to concumers. In fact, mining operations in the United States are subject to environmental, safety, and other laws that are not required in many overseas mining operations. This usually makes it more expensive to mine gemstones in the United States, and ultimately, makes the gems more costly to concumers. Because of this China has made some tremendous inroads with some completely priced peridot over the last few years.